Introducing Locomotives to be seen on Public Running Days

The London and North Eastern Railway's B1 4-6-0

This was the LNER's equivalent to the highly successful Great Western Railway's Hall Class and the London Midland and Scottish Stanier Black Five, built as a two-cylinder locomotive for mixed traffic. However, it had the additional requirement of having to be cheap because, due to wartime and post-war economies, also the LNER, never the richest railway company, had to make savings.

The B1 was introduced in 1942, the first example was named Springbok in honour of a visit by Jan Smuts the Prime minister of what was then known as The Union of South Africa. The first 40 of the class were named after breeds of antelopes and consequently were often referred as the “Antelope class. For further information google LNER B1

The B1 has subsequently proved to be a popular locomotive for miniaturisation, following on from a design by Martin Evans in 1960 published in the Engineering in Miniature indeed we have 5 members of this club who between them possess an example. 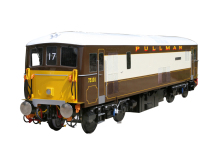 Class 73 locomotives were ordered as part of the British Railways' 1955 Modernisation Plan. This included the extension of the Southern Region electrification to various main lines and Class 73 locomotives were intended as mixed-traffic locomotives, hauling parcels, freight and also passenger trains. They usually travelled on routes that included some non-electrified sections, such as boat trains, and for this purpose were equipped to operate from the 650 or 750 V DC third-rail or an on-board diesel engine. 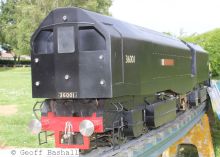 Very few if indeed any people will have seen this locomotive running on the main line.

Often described as the last giant of steam O. Bulleid was instrumental in many innovative designs as Chief |Mechanical Engineer of the Southern Railway and later for a few years with British Railways Southern Region after nationalisation For those of you interested in this remarkable man's work then the web article http://www.bulleidlocos.org.uk will tell you all you need to know and more.

Sadly, there is no preserved 'Leader'. The prototype and 2 part built locos were cut up when the project was in its infantsy. By not keeping the prototype, future generations have been denied the opportunity to fully appreciate this radical design. There is cold comfort in the knowledge that all steam was withdrawn from British Rail within 15 years of this prototype's evaluation so if it has avoided the British Railway's accountants axe then Dr beeching would have had the same effect.

Today there is only this faithfully reproduced miniature built and owned by our clubs chairman that can be seen in operation pulling riding cars for members of the public, something the revolutionary prototype never achieved. 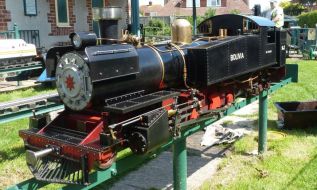 The original design was by the Hunslet Engine Company of Leeds and was for a 2 ft 6in narrow gauge, 2-8-4 Tank Locomotive for the Chilean – Bolivian railway, the order being placed in the years just before WW1. The design subsequently proved that a large locomotive with multiple driving wheels was capable of transporting heavy loads on a narrow gauge track. Additionally, significant financial savings could be made with the initial construction costs of narrow gauge track and the ongoing maintenance of it and the associated rolling stock. This basic locomotive design was then used for locomotives destined for the Dholpur – Bari railway in Northern India during the late 1950's. 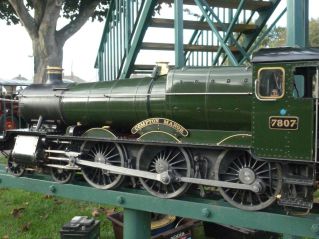 By the late 1930 the Great Western Railway has two very successful 4-6-0 locomotives suitable for mixed traffic namely the Grange Class and Hall Class but these were too heavy to be used on cross country and branch lines where the previous 4300 class has reigned supreme.

Out of this need for a lighter locomotive the Swindon works designed a lighter boiler and by employing the motion an wheels from withdrawn 4300 class were able to meet the requirements of a lighter but powerful enough locomotive to be used throughout the region. So by January 1938 the Manor class made it first appearance.